I am not your slave 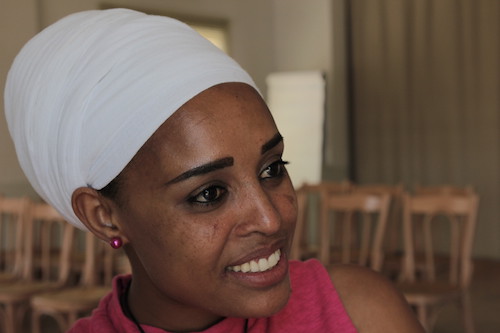 Maryam is an Ethiopian domestic worker stuck in Beirut for 7 years. She has no passport. Her last “madame” took it away from her and the Lebanese law allows it. The main responsible of this situation is the Kafala, a sponsorship system that exists in most countries in the Middle East, which allows the employer to become the “owner” of the worker and causes the emergence of human trafficking.

“I am not your slave” portrays the double fight Maryam is undertaking in Lebanon, both personal and collective. The movie follows Maryam in her struggle to get her passport back in order to solve the problems she and her family are living in the country. She suffers from anxiety, her husband is depressed and wants to go back to Ethiopia, but they can’t until Maryam will get her passport back. The silence prevails in the dinners they share at the end of the day. Only the clink of cutlery against the plates is heard. Maryam cannot stand this anymore. In order to end this situation, Maryam goes to the place of the woman who keeps her passport in order to get it back. She also goes to the Ministry of Labour and asks for help in Kafa, an association who assists the migrant domestic workers. In these scenes, we will follow her with a subjective camera. Will all these efforts be productive? Will she get her passport back?

If she gets it back, she will be free to, after seven years, to go to Ethiopia to visit her family. Her mother is waiting for her in the airport in Addis Ababa. She is finally meeting her granddaughter and she will see Maryam after seven years of suffering. When the door of the arrival room opens and Maryam and the rest of the family appear, her mother runs to hug them all. Maryam is very happy to be in Ethiopia. Nevertheless, after a while, she decides to come back to Beirut. She needs to keep on fighting in order to end the modern slavery is destroying most of migrant domestic worker’s life in Lebanon, many of them victims of all kinds of psychological and physical abuse. Her way to fight is leading the first migrant domestic workers union in the Middle East.

If Maryam doesn’t get her passport back, we will go to Ethiopia to visit her family. The movie will show the place Maryam comes from. It will show the poverty her family is living in. We will interview her mother and sisters in order to show the reasons why Maryam decided to leave and look for what it was supposed to be a better future in Lebanon.

“I am not your slave” is a cry of struggle for freedom. And this fight is shown in the movie through the activities the union organizes. It shows dozens of domestic workers like Maryam, coming from The Philippines, Ethiopia, Eritrea, Sri Lanka, Nepal and other countries attending the workshops that take place in FENASOL, the main workers union federation that embrace the new migrant domestic workers’ union. In these workshops, they inform the migrant domestic workers about their rights: a weekly day off, a decent salary, an independent room to sleep, the right to keep their passports with them, to refuse to be locked in the houses, etc. The camera follows these women also in the demonstrations they organize, which are allowed because they are embrace by FENASOL. It also follows them during the meetings they have with the Lebanese authorities in order to get the union recognized by the government and to lobby to bring the Kafala system to an end. It also goes with the women in their informal activities, as the gatherings of the Christians every Sunday in the church, where they pray all dressed in white, or in a café, where they share all their experiences.

The documentary will explain the Kafala system through Maryam’s eyes. In Ethiopia, we will rebuild the path Maryam took 20 years ago in her way to Beirut.