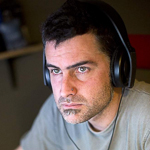 Xavier Artigas (Sabadell, 1980) graduated in sociology and in 2010 set up Metromuster production company to deconstruct the visual codes of activism and redefine nonfiction political filmmaking. In 2011 he directed his first feature No-res, and in 2013 he and Xapo Ortega presented Ciutat morta, one of the most influential films in Catalonia in recent years.

Project: IDRISSA
Not a single picture of Idrissa was found. The only thing we know is that he died in unclear circumstances in a detention center for inmigrants in Barcelona. Through him and his tragic story we intend to portray ourselves, as Europeans, and discover how we manage the fear of being invaded.