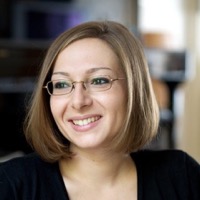 Anne Murat is an independent documentary filmmaker living in Paris. She received a Political Science Master from Sciences Po and a Degree in three European Languages.
Considering directing as both a professional and a personal quest that combines her passion for film with her concern for social issues, Anne committed herself to directing films notably for the first French development NGO. She traveled across Asia (Burma, Indonesia, the Philippines, India, China…) focusing on issues of food sovereignty, interculturality, and indigenous peoples’ rights.

In parallel, she directed personal films with a persistent approach: to give a voice to the silent majority. She conveyed Burmese people’s hopes and dreams before the economic opening of the regime in multimedia project Rangoon Cocoon. She portrayed Prof. Suryani’s struggle to unchain mentally ills in Bali. She recently explored documentary essay in Bukit Duri, revealing the human and environmental hardships of one of Jakarta’s biggest slums.