Our family farm in the Punjab, India, where my father was born and lived until the 1960s when he came to Britain as a young man, has been passed down the family line for the past twelve generations.  It's good land, some of the best in all India, located on the plains south of the Himalayas whose name means "The Land of Five Rivers".

In the family village, nestled among the fields, live 1000 members of my family.  Even though I was born and raised in London, and have barely passed more than three days at a time there in my whole life, I feel strongly for the place.  After all, it is perhaps the closest a child of immigrants like me comes to understanding the link between who you are and where you are, the link between identity and place, geography and belonging, a link that often defined identity in the age of nations that we still inhabit.

Only, just as there's a crisis in the nation-state, there's a battle going on in my family over what to do with the land in the next generation.  We are fighting it out over whether to keep the land or sell it.  The ancestral chain is under threat.

My father, 70 years old next year, wants to sell the land because, as he puts it,  I'm a 'British Monkey' who will get my ass kicked in the rough and tumble world of Punjabi land politics (think 'Taliban with Tractors' and you've got it).

His older brother, my uncle, tells me that we have no right to sell the land, that we are simply its caretakers, duty bound to look after and pass it on down the line.  After all, we never paid for it.

I'm stuck in the middle.  The feelings of tradition, heritage and family honour that the land embodies flows through part of me too and that part would like to keep the land.   But I also see my father's point that I haven't got a clue how to be a Punjabi farmer and that it's better to sell it than be cheated out of it (at best) once Dad has gone.

So I've come up with a plan.

Like the prodigal son I'm going to make the reverse trip the one my father made to Britain forty years ago.  I'm going to go to India and learn to look after my forty acres.  I'm going to spend several months in the village living the life, speaking the language and milking the oxen.  I'll plough and irrigate, harvest and plant.  I'll try to make the people of the village respect me, even fear me a little so that nobody will dare mess with me when I am the master of the land.  (And I'll try not to look too afraid of disturbing any cobras, or cry when I get dysentry.)

And I'm going to make a film about it while I do it. 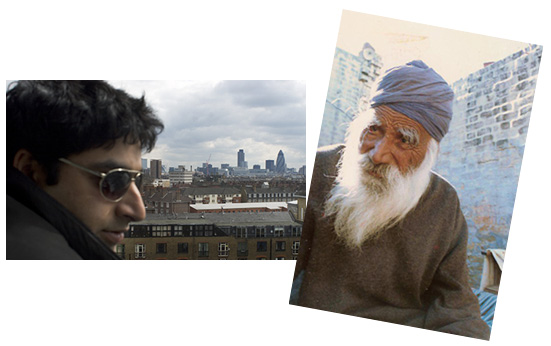