My name is human 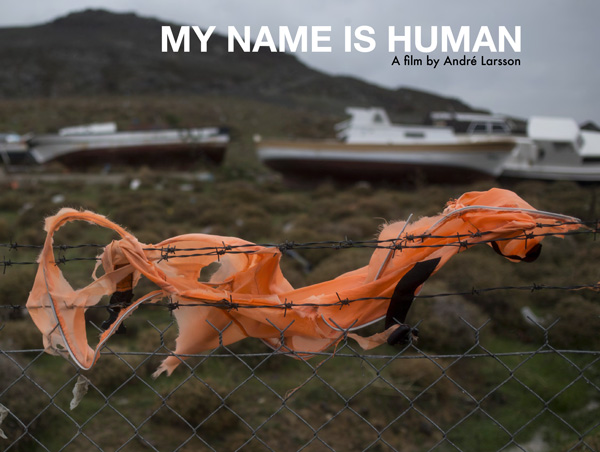 ’My name is human’ (work title) is a 20 minute documentary portrait based on a letter from a refugee in a Greek refugee camp. The film explores how the word refugee and crisis has legitimized human rights violations through EU migration policies and why the label refugee in so many ways seems to be incompatible with the label human. It also puts into question who’s crisis the refugee crisis really was. Europe’s or the refugee’s.
The film is set in the infamous refugee camp or so called “hotspot” Moria on the Greek island of Lesbos. 500,000 people passed through Lesbos in 2015. 500,000 people who left a mark on Lesbos and Europe.
As time passed the local population’s hospitality grew more and more reluctant. Europe started to close its borders. The EU - Turkey statement went into effect on march 19th 2016 forcing all arriving refugees to stay on the island creating huge overpopulation of the camps. 5500 people now live in Moria. The hotspot was built for 1500 people.
Europe now makes an example of the refugees who defies the so heavily protected borders. There is one shower for every 300 people in Moria. One toilet per 200 people. Suicides in the camps are increasing.
We get to follow Wafaa, 24 year old from Syria, who has been in Moria the past 1,5 year in her everyday life in the camp. Wafaa observes day by day how the conditions in the camp is deteriorating. With nothing to do but wait for the decision on her asylum application she try to force herself to not reflect on her situation. She is an artist who no longer paints. She says that this place kills every drop of creativity and life inside her. We slowly get to know her personal story, who she is, who she was. The camera only follows her but we understand more and more about the conditions under which she now lives from her surroundings.
With time thoughts seeps through her inner barriers. Emotions emerge in her normally distant eyes. She’s desperate. She cannot grasp why Europe is doing this to her. We hear her try to come up with reasonable explanations to her own situation which does not involve other human beings actively making decisions creating this camp around her. She needs to think her situation is accidental, an unwanted side effect. Otherwise, what hope is there for her?
Wafaa soon runs out of possible explanations. She faces the possibility that her situation may be a very consciously designed policy created by people she has never met in Brussels, the heart of the EU. But the question why still lingers in her mind.
She comes to the conclusion that no one can do this to another human being if they actually considered her as human. Not just a number on a factsheet or a refugee in the news. She concludes that the so called refugee crisis has nothing to do with refugees. This is Europe’s own identity crisis. An identity crisis which puts into question if Europe is willing to stand up for the same human rights we so proudly argue for in other parts of the world. The very arguments that lead so many people fleeing war to choose to travel to Europe in the first place.