Davide and the Giant 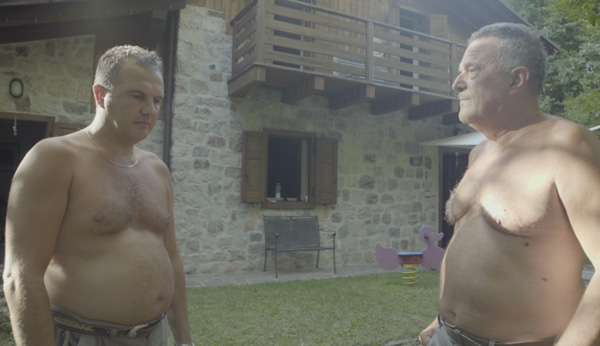 Davide is a 43 year old man suffering from a severe mental disorder. Until the age of 16 he was a normal person leading a happy life with many friends, then, all at once, everything changed. His world became a solitary and obscure place where he was prey to horrible hallucinations which tried to take over, soon making him slave to the obsessive repeating of phrases and complicated rituals. His desperation led to impulsive reactions: he would throw himself on the floor screaming or would get behind the wheel and drive hundreds of kilometres with no destination. At other times, overwhelmed by distress he would lie still in bed for days.
He tried to overcome these horrors alone for a long time but eventually had to surrender and accept that he was mentally ill, entrusting himself to the care of a psychiatrist who pescribed medicine. To avoid strong stimulus he left the city and moved to a peaceful and secluded place and he now lives in the Italian Alps in a small house in the woods.
Depite his serious disturbances, Davide is a person who boasts a certain degree of independence: he drives, he does the shopping and goes to the gym three evenings a week. He spends the rest of his time with his dog, he does gardening and goes for long daily walks in the woods. His mental balance partly depends on his medicine. The peace and quiet of the mountains, the silence of his house and his weekly routine are essential ingredients for keeping at bay the daily anguish and compulsive thoughts which torment him.
He lives with his father Michele who adopted Davide when he was 4 years old and has stood by him ever since. He is the only parent still alive and thanks to his help Davide has managed to find his own emotional stability over the years. Even now Michele's presence is vital because he reassures Davide and gives him the affection he greatly needs.
The times when his life was out of control are now far behind him. Each day he feels the pressure of a rising anguish and the hallucinations which try to enter his thoughts: despite this he manages to lead a pleasant life because he has learnt to deal with his restless mind, his father is close by and his house protects him.
Davide's independence, above all as far as housework is concerned, is however very limited. He avoids using knives because he fears that he could inadvertently harm Michele and so when he is alone he never cooks a hot meal. He doesn't know how to use a washing machine or how to light a fire and the unexpected easily throws him off balance. He follows a routine which prevents him from venturing away from home if not to do things or meet people he's already familiar with.
Michele is 68years old and knows that one day Davide will be left alone in a future full of uncertainty and danger. If he is not able to look after himself, cook, manage the house and above all, if he is not emotionally strong enough, the social services will oblige him to leave his paradise and go and live in sheltered housing. If this should happen Davide could swiftly plummet back into his nightmare and lose that fragile balance that he's worked so hard to gain.
The awareness that this could happen torments Michele and so he is determined to find a solution. He wants to teach Davide to be independent in the managing of the house and learn how to get by without Michele's love and support. He is encouraging him to handle his own life.
This documentary tells the story of both Davide, a kind and loveable man who must face once again his enemy and fight to survive and his father who will guide him in this difficult task.