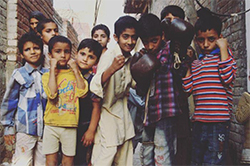 Kids Fight is a film about children who face recruitment by terrorist groups, drug abuse,poverty and fight their way out of predestined lives through Mixed Martial Arts (MMA) in Pakistan. The film takes us to the slums of Lahore, where we follow the struggles of the most marginalised groups in the country- the youth. We see how MMA might be the very fight for their lives.