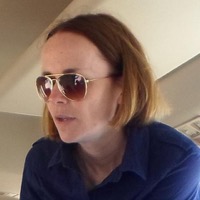 I am a freelance print journalist of more than 20 years who has recently moved into documentary making and aspires to use the power of film to tell untold stories of people living in places where the rule of law has broken down. I have made three short documentaries - on arranged marriage in the UK, the collapsing fishing industry in southern England and my most recent project about lawyers who defend people accused of war crimes, which I am expanding into a feature-length film. I also teach journalists in countries recovering (or still embroiled) in conflicts such as Libya, South Sudan and the Democratic Republic of Congo. At home in the United Kingdom, I work for a small non-governmental organisation that provides safety training for local journalists in dangerous environments and advocates for an end to the shocking impunity that currently exists when journalists are killed.